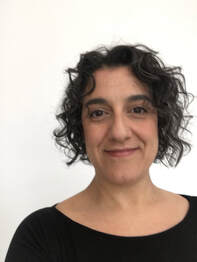 Interpretopia was established by Nicole Cartagna (formerly Nicole Montagna) in 2007. She has been interpreting for over 20 years, first developing her interpreting career in the San Francisco Bay ﻿Area, and now living and working in her hometown of New York City.

Her adventures in sign language had her spending her senior year of college at Gallaudet University, studying interpreting at Ohlone College, and has taken her around the world interpreting and participating in international sign language community events.

She received an MA in Instructional Technology from San Francisco State University in 2008. Graduate school studies was where her interest in the digital revolution and its impact on interpreting began. Aside from projects exploring this theme she interprets mostly in STEAM related settings (Science, Technology, Engineering, Arts, Math), as a designated interpreter and in academia. ﻿